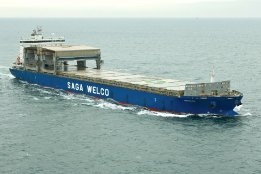 Local strike action has left a bulk carrier owned by Norway-headquartered Saga Welco trapped at berth and unable to lift bunkers in the Canadian West Coast port of Kitimat.

The MV Indiana is understood to have made a scheduled port call at the end of July to load aluminum, shortly after which workers unionized under Unifor Local 2301 at Rio Tinto's Kitimat aluminum went on strike.

With the port of Kitimat located inside the North American Emissions Control Area (ECA) and MV Indiana running out of 0.10%S compliant fuel, the owners have attempted to refuel the ship via local supplier Arbutus Point Marine Ltd.

Likewise, tug boat operators are also understood to be unable to cross picket lines, leaving the vessel effectively stuck until the strike is resolved.

Further complicating matters is the fact that COVID-19 restrictions are preventing the foreign crew from disembarking.

"One of the more immediate concerns is that the ship will soon run out of ECA compliant fuel, and switching to VLSFO will be in violation of sulfur regulations," Marc Gawthrop, managing director of Arbutus Point Marine, told Ship & Bunker.

"Unless the strike is resolved, the vessel will of course eventually run out of all available fuel. We are hoping that for the sake of the wellbeing and safety of the crew that Unifor Local 2301 shows compassion to their fellow International Transport Workers' Federation members and allows the vessel to be refulled."

Calls and emails to both Unifor Local 2301 and Rio Tinto have gone unanswered, he added.

Local media outlet Northern Sentinel reports that officials from Rio Tinto and Unifor 2301 met last week but the status of negotiations is unclear.

The company tested 360 mt of biofuel bunkers on board its Suezmax tanker the Statia over a two-week period last month.

The firm offset the emissions from its general cargo ship the MV Sider Rodi travelling from Livorno to Porto Vesme last week.