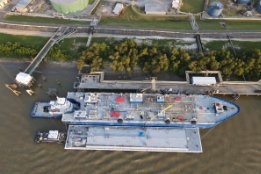 The ATB was built in 2016 and then purposely modified over the last several months with the addition of multiple thermal oil heaters, cargo pumps, pipelines, and davits and fenders, all to ensure segregation and redundancy.

The unit has over 83,000 barrels of segregated capacity to enable the delivery of both VLSFO and MGO products.

Stone Oil says the intention is to add significantly to the offering, not only in equipment, but location as well.

For more information John W. Stone Oil Distributor can be contacted as follows:

The company plans to invest €30 million ($35.6 million) to bring LNG bunkering to its Los Barrios terminal at the port by the end of 2023.

Balearia's ferry the Bahama Mama was bunkered at the port on Wednesday,