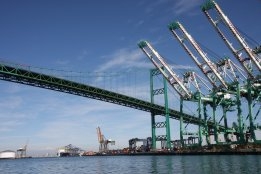 Shore power service has been suspended at the Port of Long Beach as California tackles an energy shortage during the current heatwave.

The suspension will be in place until two days after the California Independent System Operator stops issuing grid warnings or emergency notices, news provider Port Technology reported on Friday. Last year a similar suspension was imposed from August 17-20.

"The impact of the order will be on shore power," Mario Cordero, executive director of the Port of Long Beach, said in a press conference on August 5.

"We will take a pause on shore power capabilities as we have seen the shortfall of electricity predicted this summer."

A larger energy shortage is predicted for next summer, according to Port Technology.

The relaunch at Suape may be linked to the firm's halting Salvador sales in late 2021 after selling its 330,000 b/d Mataripe refinery, a local source tells Ship & Bunker.