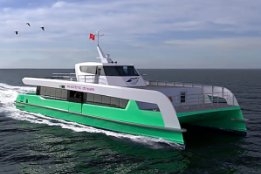 Shell today said it will launch a fully electric ferry service in Singapore during the first half of 2023, a move that marks a first for both Shell and Singapore.

Shell says it has awarded a contract Singapore's Penguin International Limited to design, build and operate at least three fully-electric ferries as part of the project.

The vessels will be new build 200-seater single-deck ferries will be used to transport passengers between mainland Singapore to Shell’s Energy and Chemicals Park on the island of Bukom.

The fully-electric ferries will be powered by a lithium-ion battery system with a capacity of 1.2 MWh and run at speeds of over 20 knots.

The new vessels will replace the conventional diesel-powered ferries currently being used.

"I thank Penguin and the Maritime and Port Authority of Singapore in supporting this shared ambition."

The Sunflower Kurenai, owned by shipping firm MOL and operated by its subsidiary Ferry Sunflower Co, entered service on January 13.

A new physical methanol trader at the firm will focus on international bunker markets.