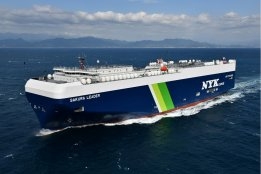 The 12 ships will be built at Shin Kurishimao Dckyard and Nihon Shipyard, the company said in a statement on its website on Tuesday. NYK will have a total of 20 gas-powered pure car and truck carriers by fiscal 2028.

"NYK aims to further advance to zero-emission vessels utilizing marine fuels that have a lower environmental impact, such as hydrogen and ammonia, from around 2030," the company said in the statement.

"For the moment, NYK is positioning LNG fuel as a bridge solution until future zero emission ships can be realized."

The consensus is even OPEC's output relaxation won't be enough to replenish supplies.

The company has signed a memorandum of understanding with Porto Central to build an ammonia production, storage and distribution facility there.