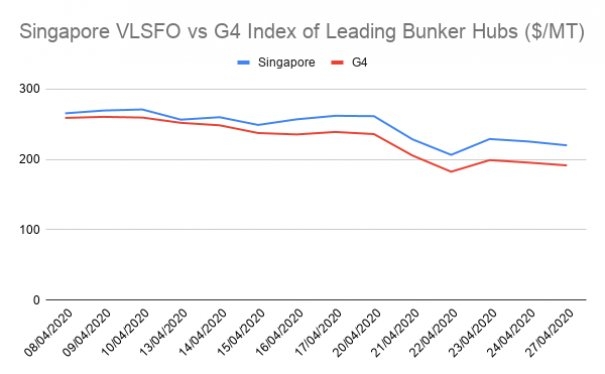 Singapore's VLSFO premium to the G4 index of prices at the leading bunker hubs has widened since the Hin Leong story broke earlier this month. Image Credit: Ship & Bunker

The port of Singapore has become one of the only markets with strengthening bunker margins in recent weeks, bucking the trend caused by the COVID-19 pandemic elsewhere as the Hin Leong crisis eliminates activity from one of its largest players.

The premium for very low sulfur fuel oil (VLSFO) delivered in Singapore over cargo prices in the region has almost quadrupled to $29.13/mt by April 24 from a record low of $7.39/mt on April 9, according to price reporting agency S&P Global Platts.

Meanwhile Ship & Bunker pricing shows Singapore's VLSFO levels gaining versus other parts of the world, climbing to a premium of $28.50/mt to the G4 index of prices at the top four bunkering hubs by Monday, from a $6.50/mt premium on April 8, the day before the Hin Leong story first broke.

Hin Leong has yet to make an official comment on its financial situation, and company representatives have not been available for comment.

Hin Leong's troubles with its lenders have stopped its marine fuels subsidiary Ocean Bunkering -- one of Singapore's top accredited suppliers -- to halt its activities in the bunker market there over the past two weeks, leaving other players to pick up spot enquiries from buyers it was unable to serve.

[Hin Leong] has left Singapore's bunker market tightening while the rest of the world's markets weaken in the face of soft demand and unrelenting supply.

This has left Singapore's bunker market tightening while the rest of the world's markets weaken in the face of soft demand and unrelenting supply.

Rotterdam's delivered VLSFO premium to local barge prices narrowed to just $8.94/mt by April 24, according to Platts, down from an average of $19.41/mt in March and $26.24/mt in February.

Limited storage capacity for oil products across the barrel is leading to narrowing margins in most markets around the world.

One of the hardest-hit locations for the bunker industry appears to be the US Gulf, where price reporting agency Argus Media reports delivered VLSFO has dropped to a discount to cargo prices.

VLSFO delivered in the US Gulf sank to a discount to wholesale prices of $8.94/mt in the week to 24 April, Argus reported Monday, from an average premium of $17.58/mt in the first half of April and of $30.35/mt in March.

But margins in Singapore may start to weaken again and catch up with the rest of the world in the coming weeks with new entrants joining the market.

Last week Singapore's Maritime and Port Authority (MPA) handed out its first new bunker supplier licences since 2017, adding TFG Marine and Minerva Bunkering to its list of accredited suppliers and taking the total number up to 45.

Singapore's transport minister Khaw Boon Wan noted that it was 'fortuitous' that his country had invited new bids for bunker supplier licences in December.

"Other existing bunker suppliers have immediately come in to fill the gap," he said last week.

Vancouver's VanadiumCorp Resource is working together with Conoship International Projects in the Netherlands and Vega Reederei and Partners in Germany on the project.