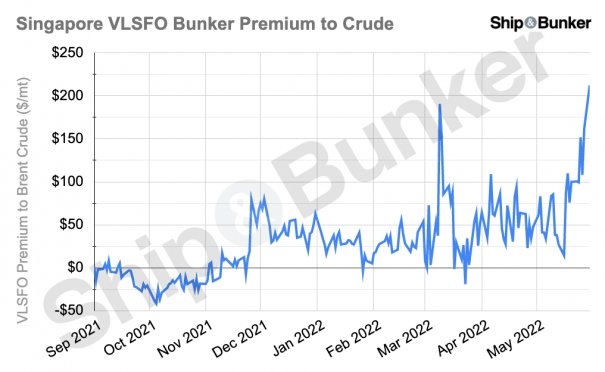 VLSFO prices at a range of top ports in the Asia-Pacific region have jumped to record highs on reduced supplies arriving just as demand starts to improve.

Singapore's VLSFO price gained $67.50/mt to $1,128.50/mt on Monday, according to Ship & Bunker prices, the most since the price started to be tracked in July 2019 and beating the previous record high of $1,207.50/mt set on March 9 of this year. A broker's note on Tuesday morning put the earliest availability for new Singapore stems at June 13.

This is thanks to Mr Putin.

VLSFO at Zhoushan, Hong Kong and Tokyo also hit record highs on Monday, while Busan's level was just $11.50/mt off a record set on May 18. The Ship & Bunker APAC Average index of prices across all of Asia-Pacific's ports gained $25.50/mt to $1,074/mt, also a record.

The region is facing a chronic shortage of VLSFO driven by the slow phase-out of Russian oil from global markets, combined with an anticipated jump in demand as lockdown measures in Shanghai come to an end.

"This is thanks to Mr Putin," one supplier in the region told Ship & Bunker on Tuesday.

"The war is making HSFO and VLSFO super-tight in Asia.

"Singapore has to import crude and products from elsewhere; they don't produce their own crude.

We are hearing cargoes will still be coming -- we just don't know when.

"I can't see the end of this until the war is over."

The situation cannot last indefinitely. With a $246/mt VLSFO price spread between Rotterdam and Singapore on Monday, the arbitrage to send cargoes from Northwest Europe to Asia-Pacific to ease the supply shortage there should be firmly open. If shipped today, these cargoes would take about 45 days to arrive.

The question hanging over the market in Asia-Pacific is when extra supplies will arrive and in what quantity, one Singapore trader told Ship & Bunker.

"It's really hard to say, the way things are going," the trader said.

"It could go either way.

"We've seen HSFO premiums shooting up and then coming down hard in a matter of weeks, so I wonder if the same also goes for LSFO.

"We are hearing cargoes will still be coming -- we just don't know when, and if it's enough to meet the demand.

"As things are, it's already generating a snowball effect as we speak."

Earlier this month the company's marine fuels division bought offsets to cover the emissions from the voyage of the FMT Bergama from Huelva to Naples.

Christoffer Pedersen has joined the firm in Panama City as general manager of its Panama unit as of this week.

The organisation cited shipping companies switching from distillate fuels to residual fuels in response to surging MGO prices as a likely cause.