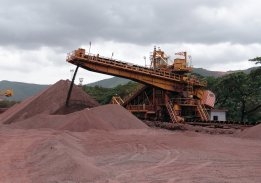 The ships will be carrying iron ore cargoes from Australia to China. File Image / Pixabay

The 209,000 DWT ships are scheduled to be delivered throughout 2022, EPS said in a statement on its website Thursday. The ships will be taking iron ore cargoes from Australia to China.

"When these vessels deliver in 2022, they will be the cleanest and the most efficient in the entire dry bulk shipping fleet and will be IMO 2030 compliant eight years ahead of schedule," Cyril Ducau, CEO of EPS, said in the statement.

BHP has rowed back from some of its previously announced plans to use LNG as a bunker fuel on the ships carrying its cargoes.

In July 2019 the company announced a tender for LNG-fuelled transport for up to 27 million mt of its iron ore, saying it was seeking to reduce its emissions along the busiest bulk transport route in the world.

The company's decision now to charter just five gas-powered newbuildings is down from its original plan for 14, according to shipping intelligence service Alphaliner.

New product comes into play when prices move beyond a set limit.

Quadrise is now working with industry partners to test the new product in engines.