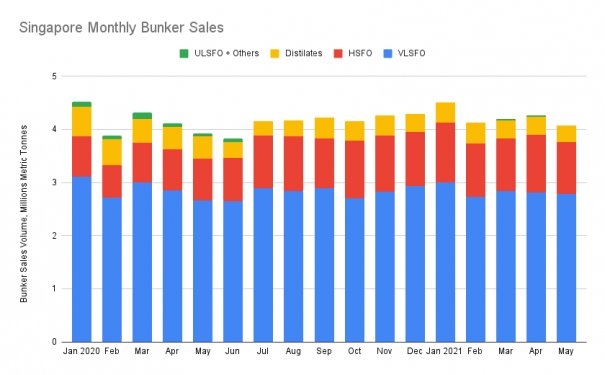 SIngapore's bunker sales are in decline after a strong start to the year. Image Credit: Ship & Bunker / Data Credit: MPA

Bunker demand in Singapore, the world's largest marine fuels hub, declined on a monthly basis to the lowest level in 11 months in May, while advancing slightly from the level seen in May 2020 at the start of the COVID-19 crisis.

The city-state's total demand reached 4.1 million mt in May, according to preliminary data from the Maritime and Port Authority, down by 4.3% from the previous month and up by 3.7% from May 2020.

The yearly gain partly reflects the slip in demand seen in at the start of the COVID-19 crisis last year; May 2020's level was 4.6% lower than April 2020. Demand a year ago may also have been suppressed by shipping companies working through the VLSFO stockpiles they had built up during the IMO 2020 transition, rather than taking on new purchases. 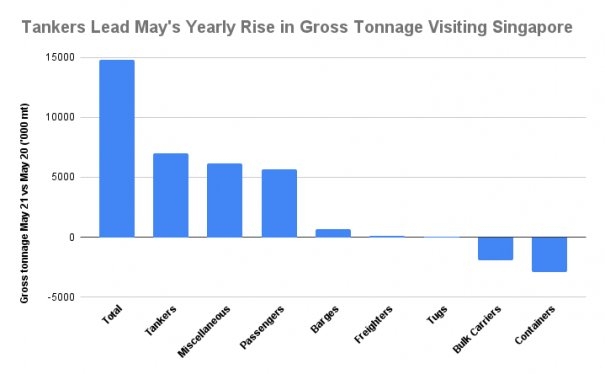 The total of gross tonnage visiting Singapore jumped by 6.6% on the year to 238 million mt. Tankers led the recovery, gaining 7 million mt, and passenger vessels also saw a strong 5.7 million mt rise, while the gain was pared by a 2.9 million mt drop in container ships and a 1.9 million mt decline for bulkers.

MSC has signed a deal with Fincantieri Infrastructure Florida to build the facility.

The two companies will seek to develop 'safe, sustainable and competitive' technologies to reduce emissions.