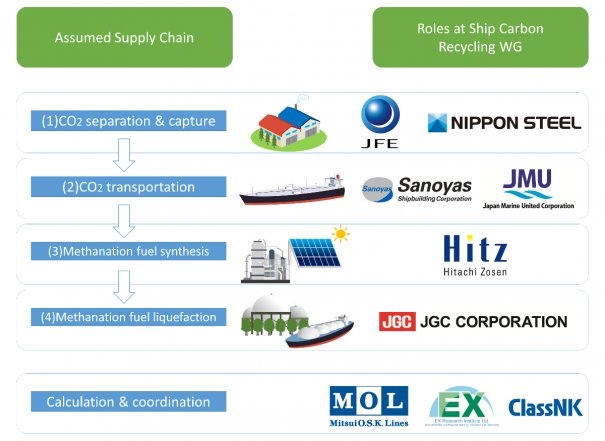 A group of Japanese companies is working on the idea of using carbon emissions from the steel industry as a feedstock for the production of methane to be used as a bunker fuel.

The plan could be a significant milestone in the development of alternative fuel supply chains for the shipping industry.

The companies are working on a supply chain of capturing carbon dioxide emitted during steel production, transporting it in a liquefied state to a hydrogen production site, generating synthetic methane using solar power there by combining the carbon dioxide and hydrogen, and then liquefying this gas and using it as a marine fuel.

Because the fuel will be produced using renewable power and carbon dioxide captured from industry, it would be able to be used in compliance with the IMO's plan to halve shipping's greenhouse gas emissions by 2050.

"The group will also identify challenges and decide whether to proceed with subsequent next-stage activities along with the content of those activities," the companies said.

"The acquired knowledge will also be widely disclosed in and out of the industry."

Between them, the companies in the working group have the means to create a complete supply chain for the product, and the fact that they are working together is a positive sign for those hoping to see low-carbon fuels become available for the shipping.

The history of the development of LNG bunkering is instructive: for years this industry was stymied by a chicken-and-egg problem where demand was deemed unlikely to emerge before supply was guaranteed, and vice versa.

LNG bunkering was given a significant boost when French container line CMA CGM started to work with energy supplier Total on the issue. Once the carrier starts taking delivery of its new LNG-powered giant boxships later this year, its fuel consumption will take up a large share of total LNG bunker demand, and provides some encouragement for other companies to invest in similar deals.

Trump, Jobs Numbers Cause Crude To Plummet Over 3%

Covid-19 pandemic has weighed more on the oil market than any other asset class, says analyst Kilduff.

Commercial onshore residue stocks sank by 6.6% to 20.735 million barrels in the week to September 9.