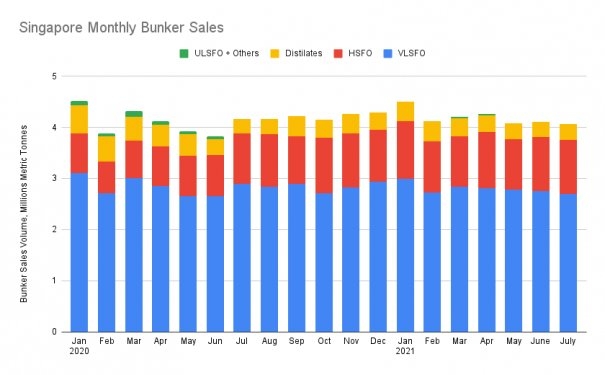 Bunker demand in Singapore, the world's largest marine fuels hub, declined on both a monthly and yearly basis in July as renewed concerns about COVID-19 lockdown measures in Asia slowed shipping activity.

The city-state's total demand fell to 4.1 million mt in July, according to preliminary data from the Maritime and Port Authority, down by 1.2% from the previous month and by 2.3% from July 2020.

The yearly decline is from a period in 2020 when shipping activity in Asia was returning to normal after the worst of the COVID-19 pandemic's impact. July 2020's sales level was the highest since March of that year, and preceded a steady recovery for the remainder of the summer and the start of autumn. 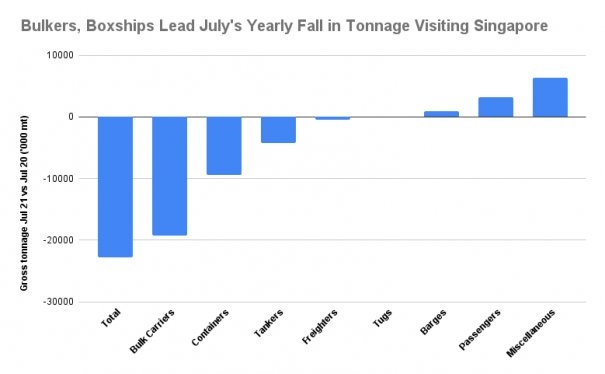 The total gross tonnage visiting Singapore dropped by 9.1% on the year to 229 million mt. This decline was led by the dry bulk segment, which lost 19.3 million mt, and by a 9.4 million mt drop in container tonnage.

The firm's Containerised Energy Storage System (ESS) is housed in a 20-foot ISO container and can be integrated with a vessel's main power distribution system.

The four vessels will primarily run on LNG, supplemented by battery power.

A 34-year-old worker at the Ningbo Meidong Container Terminal tested positive for COVID-19 on Tuesday, prompting the authorities there to start to turn away ships.