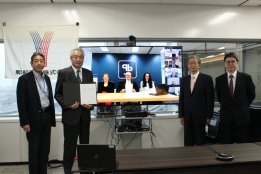 Energy company NYK Trading has signed a deal for the exclusive sales and distribution rights of Sterling PlanB's battery systems in Japan.

As part of the deal NYK plans to sell Sterling PlanB's systems to small vessels including tugboats, short-distance ferries and merchant vessels in Japan's domestic market, it said in an emailed statement on Monday.

"This move reflects the growing awareness that energy storage technology will be an essential component of the evolution of zero-carbon shipping, both in Japan and globally," the companies said in the statement.

"Whether in combination with zero-carbon fuels, wind assisted propulsion, or other optimisation solutions, energy storage systems can play a role in peak shaving, managing a hotel load, or supplying emergency power, both increasing performance and safety, and reducing fuel consumption."

For large cargo ships battery power is unlikely to play a major role in the shipping industry's future energy needs, based on the limitations of the current technology, but it is already increasingly being used for smaller ships to run with zero emissions for parts of their journeys.

The company is looking for candidates with two to five years of experience, preferably in the shipping industry and with knowledge of bunkers, lubricants or chemicals.

The change is only "until the competent environmental authority has the opportunity to better assess the scenario."

Industry bodies have argued that both their proposal for a small bunker levy to build up a decarbonisation research and development fund and wider market-based-measures should be discussed simultaneously at the IMO this year.