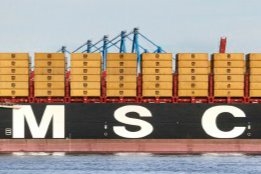 MSC is the largest container line in the world by fleet capacity. Image Credit: MSC

Container line MSC, the largest in the world by fleet capacity, has ordered 20 more boxships capable of running on LNG as a bunker fuel, according to shipping intelligence service Alphaliner.

The firm has ordered 10 8,100 TEU ships and another 10 11,400 TEU vessels from Jiangsu New Times Shipbuilding in China, Alphaliner said in a note to clients on Tuesday.

The ships are all expected to be able to run on LNG as well as conventional bunkers, and are due for delivery in 2024-2025.

The order will be another significant boost to the prospects of LNG as a bunker fuel, and bio- and synthetic LNG when these lower-carbon alternatives become available.

MSC joins fellow box shipper CMA CGM in the adoption of LNG to power its vessels, with the latter having first announced it was to use gas bunkers in 2017.

The latest data from LNG bunker advocates Society for Gas as Marine Fuel (SGMF) indicates there are currently 281 LNG-fuelled vessels in operation with an additional 468 on order.