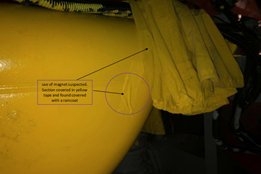 Magnets, and suspected use of magnets on MFMs was found. Image Credit: (C) 2019 Petro Inspect

There has been talk in the market for some time as to whether it is even possible for such a magnet-based attack to disrupt MFM meter readings, but Petro Inspect says it has now witnessed and published what it believes is the first public evidence of an attempt to exploit such a malpractice.

"During a recent bunker quantity survey onboard a well-known supplier's bunker barge in Singapore, one of our surveyors caught use of a large powerful magnet – what appears to be a neodymium type magnet - attached to the U-bend of the MFM," Petro Inspect founder Kaivan H. Chinoy told Ship & Bunker.

"Since we have heard of this as a potential malpractice but not many are aware of specific effects of magnetism on the MFM, Petro Inspect took the initiative by contacting a number of MFM manufacturers for further advice, including industry leader Siemens Coriolis Flow Meter's team."

While noting that Siemens was not the manufacturer of the MFM that had the magnet attached to it, Chinoy says the firm told him that depending on the its strength and where it is placed, a magnet on the casing of a Coriolis meter could have an effect on a meter's performance - that is, influence the amount and direction of the measurement offset.

Singapore is the world's largest bunkering port with its 51 licensed bunker suppliers collectively selling some 50 million tonnes of bunker fuel per year. It is the only port to mandate the use of MFMs for bunkering. The official accuracy level of the meters is +/-0.5%, although accuracy levels in practice are reported to be in a tighter range. Mandating use of the technology for MFO bunkering is widely considered to have all but eradicated once common short delivery malpractices such as the infamous "cappuccino" bunker effect.

But with such vast volumes of bunker fuel being sold in the hub, even a tiny influence of just 0.1% in favour of the suppliers could leave compromised meters operating within the mandated error range and not even affect every stem, but averaged out over a year result in the short delivery of a significant amount of fuel.

As well as the potential to influence a stem in progress, Siemens has advised that it is also possible that once exposed to the magnetic field a meter's performance could permanently be offset, meaning the sensor could read flow when no flow is present or vice-versa.

If this were to happen, it would naturally make it difficult to detect such a malpractice.

"Various standards exist and considerations have been made to prevent the use of external magnets to disrupt MFM readings. That said, there is still a potential for this to permanently alter the MFM readings even after the magnet has been removed. This would result in the meter needing to be recalibrated to repair the offset," Siemens told Ship & Bunker.

"Placement of a sufficiently strong magnet would have to be just right, where the pickup sensors are located, and for just the right amount of time to cause any significant issues."

It is not clear whether the magnet observed by Petro Inspect met the requirements needed to influence the MFM readings.

While the inner workings of an MFM such as the driver coils all work via magnetic induction of an electronic signal, the majority of the material in all Coriolis meters including the casements is nonmagnetic, which means a magnet would need to be attached to it by other means.

Chinoy said that in the case it observed, tape was used to hold the magnet in place on the MFM. Evidence of historical use of tape to attach items to MFMs installed on other barges has also been observed and documented.

"To be clear, there is no evidence to suggest that the magnet found taped to the MFM resulted in any fuel theft, but it is clear from what we have been told that such a strong magnet has no place taped to an MFM. Being actively involved in loss prevention work, our policy is to report all potentially fraudulent activity to the authorities to investigate further," said Chinoy.

"Even though it is not clear if such an attack is being successfully exploited, stakeholders should be aware of the facts that we found a magnet attached to a MFM and a manufacturer of the technology has warned such a magnet may cause interference affecting the accuracy of the MFM.

"Bunker buyers should therefore now be on the lookout for such a malpractice and use a bunker surveyor able to spot the signs of any attempt to exploit it."

Responding to a request for comment on the matter, the Maritime and Port Authority of Singapore (MPA) said it takes a serious view of any attempt to jeopardise the integrity of the MFM and will not hesitate to take immediate and firm action against those who do so.

"As part of our industry engagement, we receive information on irregular bunkering practices from time to time, and will look into the feedback."