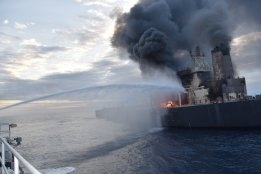 The fire on board the New Diamond was extinguished and reignited several times. Image Credit: Indian Navy

The captain of the VLCC that caught fire in the Indian Ocean earlier this month will face charges in Sri Lanka, according to news agency Al Jazeera.

There is sufficient evidence to charge the captain under the country's marine pollution act as well as the penal code for criminal evidence, Al Jazeera cited a spokeswoman for the country's attorney general as saying last week.

The New Diamond spilled some of its bunker fuel after catching fire off Sri Lanka in early September. The ship was carrying a 270,000 mt crude cargo from Kuwait to Paradip.

'We Can't Afford to Wait for the Ideal Solution' on Alternative Fuels: Probunkers

Probunkers sees a general consensus that LNG bunker demand will grow to 8-12 million mt/year by 2025.