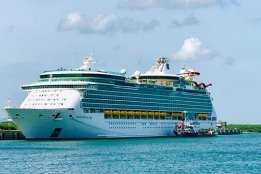 The Navigator of the Seas recently refuelled at the Sri Lankan port on its way from Egypt to South Korea. Image Credit: Hambantota International Port

The first cruise ship has called at Hambantota for bunkers since the relaunch of bunker supply there earlier this year.

Prudential Shipping's cruise vessel the Navigator of the Seas recently refuelled at the Sri Lankan port on its way from Egypt to South Korea, Hambantota International Port said in a statement on its website last week.

"Different categories of vessels calling at the port for this service is another step in the port coming closer to establishing itself as a strategic bunker supply location on the main East West shipping route," the port authority said in the statement.

"This vessel is also the first passenger vessel to arrive at the port since the outbreak of the pandemic."

As such it has long been seen as a potential location for a major bunkering hub, but until earlier this year bunker fuel availability at the port had been limited to a short-lived period in 2015.

Local supplier Lanka Marine Services announced the relaunch of bunker supply at the port in March.

The decisive factor in terms of climate friendliness is that the energy-intensive production of ammonia is switched to renewable energy sources, firm says.

The firm has recently seen 10% month-on-month growth in its bunker volumes.