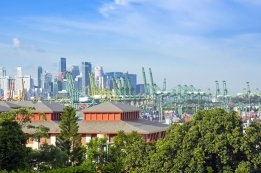 Ocean Bunkering Services (OBS), a subsidiary of defunct oil trading house Hin Leong, has lost its licence to bunker in the port of Singapore.

The Maritime and Port Authority of Singapore (MPA) said the company's bunkering licences have been suspended until further notice, Reuters reports.

The supplier is still listed on MPA's last official list of licensed bunker suppliers in the port, but effective October 9 the supplier is noted to have had its licence suspended.

"Given that OBS has stopped its bunkering operations since April this year and has not been able to fulfil its licensing commitment to date, MPA has suspended their bunkering licences until further notice," an MPA spokesperson said in an emailed response to Reuters on Monday.

Hin Leong collapsed under mounting debts in May.

A bunker supplier with similarities to OBS was put up for sale by Hin Leong's judicial managers PwC earlier this month.

The prosecution in the case believes the Bunker Holding CEO knew or should have known about some of the jet fuel trades at the heart of the case.