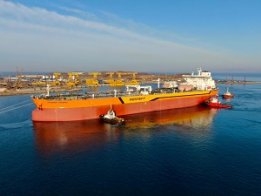 The Aframax tanker Vladimir Monomakh was launched on May 12 and is now ready to have its navigation, power and other systems tested at sea, the company said in a statement on its website Saturday.

The vessel will be Rosneft's first tanker capable of running on natural gas.

For the testing period the ship has been bunkered with about 300 mt of very low sulfur fuel oil produced at the Komsomolsk refinery, Rosneft said.

Rosneft ordered five LNG-fuelled Aframax tankers in September 2017 that are due to enter service in 2021.

Monjasa Hands Over Operation of Skaw Oil Terminal to Unioil

As of June 1 Monjasa accepted "an attractive offer" from Unioil to operate the facility.