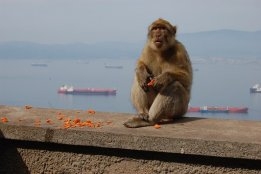 Environmentalists found high concentrations of pollutants in air samples taken at the weekend at the Mediterranean port of Gibraltar.

The samples, which were taken next to cruise vessels moored in Campo de Gibraltar [an area between the port proper and the mainland], showed "high concentrations of ultrafine particles", according to international environmentalist groups Ecologistas en Acción from Spain and Nature and Biodiversity Union (NABU) from Germany.

"Air pollution levels [were] up to 140 times higher than in areas with clean air" from samples taken on Friday, Saturday and Sunday when different cruise ships visited the port, a statement from NABU said.

NABU policy officer Malte Siegert called for the Mediterranean Sea region to be designated a emission control area (ECA) as is already the case in the North and Baltic Seas.

"This will significantly improve the air quality in the region," Sigert said.

Local bunker sources told Ship & Bunker that while shipping undoubtely contributed to the poor air quality in the area, pollution from other sources, such as industry, also played their part.

Ships plying ECAs must use bunker fuel which is capped at 0.1% sulfur.

The current global sulfur cap stands at 3.5% although this is set to fall to 0.5% in 2020 under new International Maritime Organisation rules.

Despite VLSFO having only marginally more off-specs than HSFO, it is the critical quality parameters that are often recorded off-spec in VLSFO.

Despite earlier fears, widespread problems with new 0.50% sulfur VLSFO fuels have so far failed to materialize.