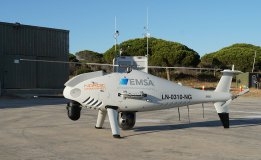 The aircraft being used is a Camcopter S100 unmanned helicopter, equipped with an emissions sensor from contractor Explicit and operated by Nordic Unmanned. Image Credit: EMSA

The European Maritime Safety Agency (EMSA) has deployed a drone to assist with bunker sulfur limit compliance in the Strait of Gibraltar.

EMSA has provided the Spanish Ministry of Transport, Mobility and Urban Agenda with the remotely piloted aircraft to monitor sulfur and nitrogen emissions of passing ships, it said in a statement on its website on Thursday. The aircraft could also be used to support search and rescue operations.

The aircraft being used is a Camcopter S100 unmanned helicopter, equipped with an emissions sensor from contractor Explicit and operated by Nordic Unmanned. The deployment is the second use of an aircraft of its kind in the area.

"Emissions surveillance operations such as these will reinforce the recent approval of the Mediterranean Sea as an emission control area by the International Maritime Organization which is expected to come into force in 2025," EMSA said in the statement.

A total of just eight LNG-fuelled ships were added to the orderbook in October.