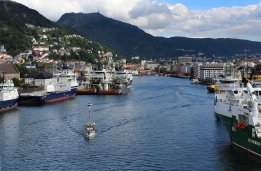 Powerzeek's chief executive Dag Lilletvedt has a background in the gas industry and as an entrepreneur in the sector since 2005.  He conceived of the Powerzeek platform in 2017, according to the company's website.

The firm is headquartered in Bergen, Norway with offices in San Francisco, Vadodara and Budapest.

Natural gas in the form of liquified natural gas is seen as a viable contender to oil-derived fuel oil.  One of its strongest markets as an alternative marine fuel is in northern Europe.