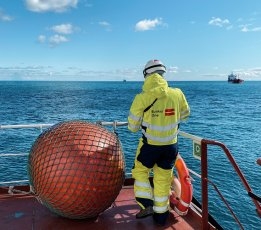 Bunker One will be supplying roughly 6-8 m3/week of the biofuel. Image Credit: Bunker One

Marine fuel supplier Bunker One has signed a small biofuel supply deal with a ferry company in Denmark.

Bunker One will supply Denmark's Molslinjen with HVO biodiesel for the Fanølinjen line, it said in an emailed statement on Monday. The product was tested earlier this year on the Fanølinjen ferries Fenja and Menja on the Danish mainland-Fanø route.

"It is our aim to operate ferries that no longer emit CO2 on their routes," Carsten Jensen, CEO of Molslinjen, said in the statement.

"Even though it's just the beginning, we are happy to now have reached the phase of testing HVO biodiesel for one of our ferry routes, as it's a step in the right direction towards our ambition of transitioning to sustainable fuels."

Bunker One will be supplying roughly 6-8 m3/week of the biofuel, a company representative told Ship & Bunker by email.

"It's a relatively small amount, but an important milestone," the representative said.

For an Excel-class cruise ship under construction currently known as hull S717.

Ammonia among the most promising of candidates as a future marine fuel, says SHI's Youngkyu Ahn.