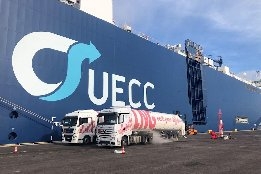 The port of Hanko, Finland, is the latest location to be added to the growing network of LNG bunker supply points.

Elenger, known in its homeland of Estonia as Eesti Gaas, says truck-to-ship LNG bunkering at the port will be performed once a week.

The firm will be supply gas bunkers to UECC vessels Auto Energy and Auto Eco.

With a capacity of 4,000 vehicles they are the largest dual fuel LNG vehicle carriers in the world.

According to data from Society for Gas as a Marine Fuel (SGMF), LNG bunkers are now supplied in 75 ports.

There are also now 170 LNG-powered ships and 164 more on order - including what will be some of the world's largest container ships.

While this represents only a tiny fraction of the 60,000 strong world fleet, advocates grow increasingly bullish on its potential to become a serious rival to traditional oil-based bunkers.

Meanwhile, Bernstein predicts a huge rebound for energy earnings in 2021.

However, concern lingers that inventories are 10 percent higher than a year ago.