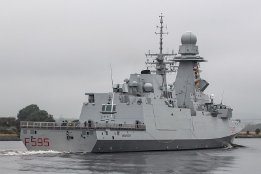 The Italian Navy is the latest force to join Ghana's anti piracy efforts in the Gulf of Guinea.

Crew from the Carlo Bergamini-class frigate Luigi Rizzo recently berthed at Tema Port to provide training to 187 soldiers to help bolster efforts to combat rising piracy in the region.

The three-day visit is expected to include a midnight drill focussing on patrolling and surveillance techniques.

In comments made to local media, Commanding Officer Dario Castelli said the cooperation efforts with Ghana and other regional nations was needed to send a strong signal to pirates.

Their programme follows a similar visit to Ghana by US Naval Forces that included training exercises, seminars, and awareness drills all aimed at ensuring the safety of the some 1,500 vessels that ply the Gulf of Guinea route every day.

Last year the Gulf of Guinea saw over 200 piracy incidents.

"Piracy levels seen last year were relatively higher than records of the past decade. As the risk of piracy along the Gulf of Guinea is increasing every day, Ghana is relentless in her efforts to strengthen the maritime security operations in the Gulf of Guinea," Theodora Ashare, Business Development Senior Officer (Corporate Upstream) at AI Energy Group told Ship & Bunker.

As Ship & Bunker reported earlier this month, AI Energy has taken its own steps in the wake of the rising piracy wth improved anchorage rates and safety assurances.

"Anchorage prices are as competitive as Offshore costs while you are rest assured of no issues of piracy or kidnapping for ransoms," noted Ashare.

"We are licensed and well-resourced to undertake bunkering operations in the Tema, Takoradi and Sekondi Ports of Ghana, including the outer and inner anchorage of these ports by our DP-Capable licensed Barges and in-port by our fleet of trucks with varied capacities."

The Luigi Rizzo is expected to continue operations in the Gulf of Guinea until she is replaced by other Naval vessel in early June.

Battery-Powered 'Flying Ferry' to Enter Service in Stockholm Next Year

The Candela P-12 Shuttle will ferry up to 30 customers between the centre of Stockholm and the suburb of Ekerö from next year.