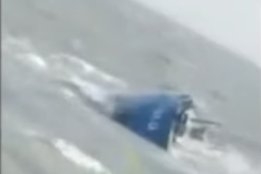 A bunker tanker sailing from Egypt to Malta sank on Saturday in the Gulf of Gabes, Tunisia.

Reports indicate the Xelo was carrying between 750 and 1000 mt of diesel at the time if the incident.

Tunisian authorities are understood to have successfully evacuated the seven-member crew.

No spill is currently expected, but safety booms have been deployed as a precaution.

Bad weather is understood to have been a contributing factor to the sinking which was also hampering efforts to inspect the wreck at the weekend.

However, in a Twitter post late Sunday, Dr. Oula Amrouni, a Researcher at the National Institute of Marine Sciences and Technologies in Tunisia, posted images of the scene and said authorities were now working in the area.

Radio Carthage FM were among the channels posting footage on You Tube purporting to show the stricken vessel prior to the sinking.

The additive is an evolution of the firm's 'Yunic 800VLS' additive it developed in 2019.

MAN Energy Solutions has been awarded the contract to replace the engine on the 3,600 TEU boxship Daniel K. Inouye.

The company has joined the group with a view to increasing cooperation to help achieve a net zero 2050 target for shipping.