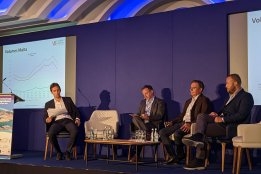 Pippo Pandolfino, CEO of local supplier Valletta Bunkers, revealed the figures during a panel session at the IBIA Mediterranean Energy and Shipping Conference in St Julian's on Thursday.

Unlike other bunkering locations, Malta did not see a drop in demand in 2020 with the outbreak of COVID-19; 2020's figure was the highest in at least a decade.

Malta's main competitor as a Mediterranean bunker port is Gibraltar. As well as bringing in cruise and passenger traffic, it benefits from its geographical position along the tanker route in between the Middle East and the US Gulf.

Marina Hartwell has joined the firm as a bunker trader in London as of this month.