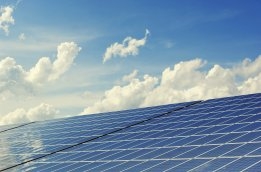 A floating green hydrogen production facility to refuel ships may soon be coming to the Netherlands.

Hydrogen producer Voyex and solar energy company SolarDuck plan to build the facility near the port of IJzendoorn, the companies said in a press release on Friday. The Province of Gelderland will provide 350,000 euros of funding for the project.

SolarDuck will provide four linked platforms, each equipped with 39 solar panels, which will provide power to a 10 kw electrolyzer producing hydrogen. Testing will start from April 2021.

The hydrogen will be bonded to an oil-like liquid allowing it to be transferred more easily.

The combined liquid "can be transported at room temperature, under the same atmospheric conditions as fuels such as diesel," Wiard Leenders, CEO of Voyex, said in the statement.

"The carrier itself can be reused."

The firm's Iconvert system offers flexibility on voltage and frequency, and can be equipped with batteries to form a microgrid.

Onboard Production Of Hydrogen Bunkers Explored in New Wärtsilä Partnership

Fuel will be burned in existing LNG engines.

Polish Bunker Supplier Ship-Service to be Wound Up

The company's shareholders made the decision 'quite unexpectedly' on October 29, it said on Tuesday.