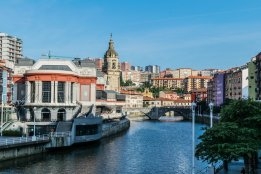 The ship will be built in Bilbao. File Image / Pixabay

Spanish bunker supplier MURELOIL has signed a deal for the construction of a hybrid bunker barge capable of battery propulsion, the company said Saturday.

The MURELOIL 7500 HT will have both diesel and battery propulsion, allowing it to produce zero emissions while in port, the company said in an emailed statement.

"The Hybrid Tanker will have a total capacity up to 7500 m 3 , divided in 12+2 tanks with four parcels for segregated cargo," the company said.

The ship will be built at MURUETA Shipyard in Bilbao over the next two years, and is expected to enter service at the beginning of 2022.

But Goldman and others still forecast steady recovery.