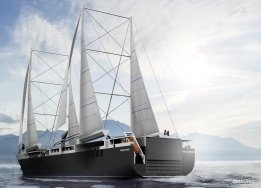 Under the deal, Clarins has agreed to reserve 20% of its US trade to go via Neoline.

Sail ships will transport cargo from Saint Nazaire on the French Atlantic Coast to Baltimore on the eastern seaboard of the US. The service starts in 2023, according to the company.

"The group is committed to maintaining this neutrality in the coming years, while at the same time, lowering its global carbon footprint," the company confirmed to Ship & Bunker.

Neoline is a French shipping initiative uses a multi-loader system based on the operation of 136 metre sailing cargo ships which are roll on/roll off vessels adapted to carry heavy and non-standard paecels.

Work will start on the two new ferries in November.