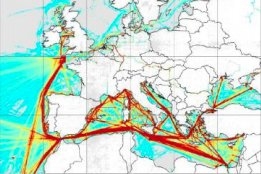 SO2 from ships in 2015 in European waters. Image Credit: IIASA

A number of environmental groups including NABU, France Nature Environment (FNE), and Bird Life Malta have collectively called for a complete ban on heavy fuel oil and the use of scrubbers within European Emissions Control Areas.

"While it is certain that switching to low sulphur fuels results in a significant reduction of air pollutant emissions, scrubbers -an exhaust gas treating system to reduce sulphur emissions- are questionable as they produce residues and prolong the use of toxic heavy fuel oil," the groups said.

"Moreover, scrubbers and high sulphur fuels hinder the uptake of advanced exhaust after treatment like particle filters. Only a combined system of particulate filters and catalytic system can guarantee the urgently needed reduction of particulate matter, soot and nitrogen oxides which threaten human health. Substantial reductions can also be archived by alternative fuels or regenerative propulsion."

The comments come in the same week Ian Adams, the newly appointed Executive Director of scrubber advocate group CSA2020, said that scrubbers "can have a profoundly positive impact on the port and ocean environment" and the early adopters of the technologies would be remembered as "visionary."

The green groups' call for a ban comes as part of a renewed push to create an Emission Control Area (ECA) for the Mediterranean Sea and the release of a new study highlighting the benefits of designating such zone.

Headline numbers from the report are that in a combined SECA and NECA, SOx would be reduced by 77% and possibly even 100% in port areas, while NOx would decline by up to 76% in coastal areas and the East of the Mediterranean Sea. The annual mean of PM2.5 will go down by 15 to 20%.

The report also says a Mediterranean Sea ECA would bring 8 to 14 billion Euro savings of health costs per year and would cost about 1.67 billion Euro.

“We see that a combined sulphur and nitrogen emission control area will have the greatest effect for the people living in the coastal areas. If governments cooperate well such a regulation could come into effect as early as 2022,” said Beate Klünder, transport policy officer at NABU.

The groups want the designation of the Mediterranean Sea as a combined SECA and NECA by 2020, and a coherent ECA for all European waters that covers all major air pollutants including sulfur, nitrogen oxides, particulate matter, and Black Carbon.

Maersk: Our Methanol Demand Could Reach 6 Million MT/Year by 2030

Some Maersk vessels may also be running on ammonia by 2030.

The ban will lock Russian oil cargoes out of the Lloyd's of London insurance market.