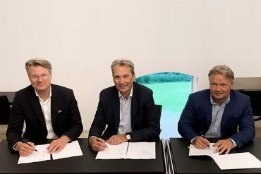 The plant will initially produce 20,000 tonnes of LBG every year for supply to the shipping and heavy transport sector, with the ability to scale up to 120,000 tonnes / year at a later date.

Bunker Holding Group's physical supply unit, Bunker One, will be one of the central buyers of the LBG and handle sales and marketing to the shipping industry.

"We're extremely proud to get the possibility to offer the maritime sector a danish-produced product that we see a rapidly growing demand for - a demand that has never been higher," says Bunker One CEO Peter Zachariassen.

Liquefied biogas is a cornerstone green fuel of the future

Construction of the NORDLIQ (Nordic Liquefaction) facility in Frederikshavn, Denmark is expected to commence in late 2021 and the plant to be operational in mid-2023.

With IMO having set a clear mandate to fully decarbonize shipping, production and supply of sustainable CO2-neutral gas is key if LNG bunkers are to play a part of the future marine fuel mix.

"Liquefied biogas is a cornerstone green fuel of the future. We're very proud to lead this project in collaboration with Nature Energy, and happy to be able to offer a responsible and effective solution for the transformation of the transport sector at this important time," says MAKEEN Energy CCO Bo Larsen.

The vision of an LNG bunker supply point in Frederikshavn is not new, with Bunker Holding having expressed interest in such a venture in 2016.

Delivery of the vessels are expected in the second quarter through to the fourth quarter of 2024.