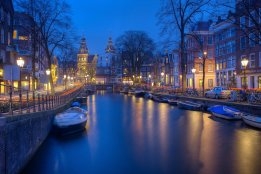 The Amsterdam-based transport provider aims to have its entire fleet battery-powered by 2025. File Image / Pixabay

The ferries will operate on three of the North Sea Canal routes, with the first arriving in the summer of 2021 and the rest being delivered every six months from then until 2023, Corvus said in an emailed statement Thursday.

GVB aims to have its entire fleet either hybrid or fully battery-powered by 2025.

"We see that the adoption rate for maritime Energy Storage Systems is increasing significantly across the globe – and especially in Europe," Kim Strate Kiegstaf, vice president for sales at Corvus, said in the statement.

"In every market, this is a process that needs to mature. Companies such as GVB leading by example will help local shipbuilding and shipowners increase their level of knowledge of the technology and its benefits.

"We do expect that almost every future newbuild will have some kind of energy efficiency solution included."

Battery power can help ships to meet their decarbonisation targets if the power used to recharge them on land comes from renewable capacity. But this solution is largely only suitable for smaller ships/