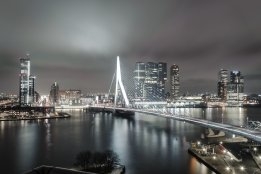 Some of the problems are emerging in the Amsterdam, Rotterdam and Antwerp area of Northwest Europe. File Image / Pixabay

Europe may be emerging as a problem area for quality issues with the new very low sulfur fuel oil (VLSFO) blends.

Of the VLSFO samples examined by testing company VPS in May, those from Europe had the highest proportion of off-specification findings, at 8.8%, according to Steve Bee, the company's group commercial and business developer.

In second and third place were North America and Russia with 7.35% and 5.68%, respectively, while at the bottom were Asia Pacific with 1.97% and the Middle East with 1.5%, Bee said in a webinar hosted by price reporting agency S&P Global Platts this week.

Bee said this may partly be down to the novelty of VLSFO, contrasting the five months' experience of VLSFO in 2020 with 50 years of high sulfur fuel oil before that.

"We are all still learning," he said.

"The biggest problems we have with fuel quality are in the ARA area," Peter Grunwaldt, general manager for bunkers at Hafnia, said in the webinar.

"We see different types of problems -- TSP, even a little bit of sulfur out of spec, a variety of hiccups.

"I'm a little bit negatively suprised that the market doesn't seem to be able to get this right yet."

The problems in Northwest Europe may be because of its position as a blending hub, Grunwaldt argued.

"They're still in a learning phase -- they're bringing in new material for blending and there's some experimenting going on, we all know that's where the money lies," he said.

"They probably need to look at the recipes extra carefully, going forward."

The two companies are now jointly offering HSFO, VLSFO and MGO in Djibouti.