No Restart Date Yet for Cape Town Refinery After Explosion 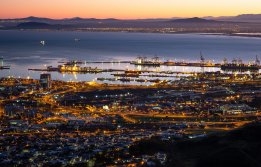 There is no end in sight yet for this month's shutdown of the Cape Town refinery after an explosion at the plant, according to its owner.

Glencore-owned Astron Energy told Reuters last week that it was still too early to say when the plant would reach full production again. The plant was shut down at the end of an extended planned maintenance programme on July 2 after an explosion and fire.

The shutdown has driven up bunker prices at Cape Town, according to Ship & Bunker pricing.

The premium for very low sulfur fuel oil at Cape Town over Durban's levels widened to $60.50/mt on Friday, up from $15.50/mt at the start of July.

CEO Cem Saral sees no return to pre-coronavirus demand levels before the middle of 2022.

But the suddenly bearish sentiment is unjustified, says Flynn.