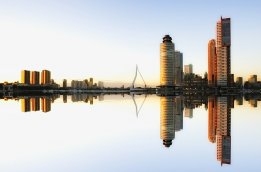 Rotterdam's authorities do not expect mass flow meters to become compulsory at the port any time soon. File Image / Pixabay

The Port of Rotterdam does not expect to see many more licences being awarded to bunker barge operators working within its waters in the near term.

Ron van Gelder, senior adviser to the Harbour Master Division of the Port of Rotterdam, set out some details about the licensing scheme in an interview with IBIA Director Unni Einemo published on the industry organisation's website on Thursday.

"At the moment we have issued 28 licences and we do not expect many more," van Gelder said in the interview.

"The licences cover around 157 bunker facilities (barges), which is more or less consistent with the number of issued licences by the port of Antwerp, who issues licences per barge."

Were any more licences to be awarded, they would only be valid until February 2023, as are the licences awarded so far, van Gelder said.

"The short interval for the licence is so we can see what the impact is, assess if it works and what we can do to improve it," he said.

"Which doesn't mean that after 2023, the licence cannot be adapted further, if this is required."

Van Gelder also discussed why the mandatory use of mass flow meters (MFM) was not introduced as a condition of being awarded a licence.

"The obligation of a mandatory MFM would have a significant impact on the bunker market," he said.

" We are convinced that the MFM could make a major contribution to reducing the number of protests concerning quantity.

"However, the bunker transporters claim that this is not necessary, if the regular ways of measurement are properly handled.

"In order to substantiate the claim (either way) we hope to have evidence which will prove the way forward, with or without MFM."

But he did not rule out an MFM mandate being introduced at a later date, if evidence can be produced that it would be beneficial.

"Depending on the number of (substantiated) complaints or reports which can be directly connected to the quantity and the current way of measurement on barges, we can mandate the MFM," he said.

"Again, only if the complaints can be substantiated with evidence that if a MFM was used the quantity difference would be less / non-existent."

Newport recommends two of its additive products as a solution to this problem: NP-HFO and NP-FOT.

The company took delivery of the LNG carrier Diamond Gas Crystal on May 31.

No confirmed oil spill reports as of Wednesday evening according to ship's operators.