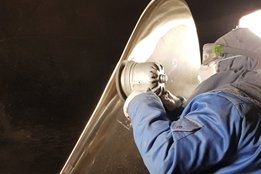 The recent introduction of the European MRV regulation is prompting operators to take further action on reducing their bunker consumption, according to Belgian-based Hydrex.

The underwater repair specialist says since EU MRV (Monitoring, Reporting, Verification) regulation entered into force in July 2015, it has seen an uptick in ship modification work, particularly to propellors.

Slow steaming is a common way to reduce consumption, but propellers are generally optimised for a certain rotational speed. Efficiency can be improved by modifying propellors to match the updated operational profile of the vessel.

Hydrex says it can perform such work without the need to take the vessel out of service for drydocking.

The EU MRV mandates shipowners and operators of vessels larger than 5,000gt to monitor, report and verify CO2 emissions for calling at any EU and EFTA port. Data collection requirements became effective on a per voyage basis in January 2018.

The firm has signed a deal with VTT to set up a technology demonstration facility at the VTT Bioruukki Pilot Centre in Espoo.

The two companies aim to provide freight-rate benchmarks and a service providing detailed estimates of GHG emissions on a vessel-by-vessel basis, as well as a calculation of the financial cost of these emissions.