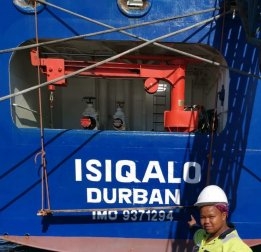 The barge will be used to deliver a variety of bunker fuel grades. Image Credit: AMSOL

Marine services company AMSOL has expanded its bunker supply footprint in South Africa, taking on a bunker barge at Durban after signing a contract with Shell.

The company will use the barge ISIQALO to transport and deliver high sulfur fuel oil, very low sulfur fuel oil and gasoil to ships at Durban, it said in a statement on its website last week.

"With a changing requirement for the transportation and delivery of multiple grades of marine fuel, Shell has partnered with AMSOL to provide a world class service in the Port of Durban," Paul Maclons, CEO of AMSOL, said in the statement.

"This partnership has resulted in AMSOL acquiring a product tanker, representing a multimillion-rand investment, and will provide sustainable employment for South Africans in the specialised niche of tanker operations."

The new addition takes AMSOL's fleet of owned and managed vessels to 18 ships, the company said.

Of the top ten container lines, MSC and Maersk have the highest amount of scrubber-fitted container freight capacity.

HFO Ban for Ships in Natural Beauty Spot of Svalbard