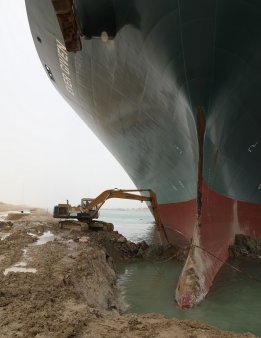 Freeing the Ever Given may take a while. Image Credit: Suez Canal Authority

Refloating the 20,000 TEU container ship currently blocking the Suez Canal for a fourth consecutive day will take at least until Wednesday.

More time will be needed to dredge sand away from the ship, news agency Bloomberg reported on Friday, citing sources familiar with the rescue efforts.

The Ever Given ran aground on Tuesday morning, blocking one of the most important chokepoints for the global shipping industry.

13 ships stuck behind the Ever Given heading north in the canal have been taken away to wait in the Bitter Lakes area, the Suez Canal Authority said on Wednesday.

"The floatation efforts included towing and pushing the grounding vessel using 8 large tugboats; largest of which is BARAKA 1 with a towing power of 160 tons," the organisation said.

"It is now clear that the container lines do not believe in a rapid resolution in the Suez Canal," Jensen said in a LinkedIn post on Friday.

The HMM Rotterdam "a few hours ago made a complete U-turn in the Straits of Gibraltar.

"Instead of going east towards the Suez canal on the journey from the UK to Singapore, it reversed back out of the Mediterranean entrance and is now heading south on the Round-Africa route."

If this becomes a wider trend over the weekend and beyond, it would be likely to give a significant short-term boost to bunker demand at some ports. Supply may also be constrained if delays to shipments of crude and VLSFO blending components persist.