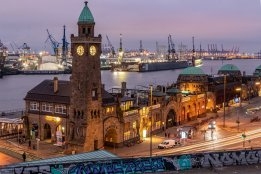 Hamburg could be home to one of Europe's largest electrolyser plants. File Image / Pixabay

A plan to develop a green energy hub at the German port of Hamburg has drawn in a clutch of global players.

Shell, Mitsubishi, Swedish utility Vattenfall and municipal gas-grid firm Warme Hamburg have signed a letter of intent for hydrogen produced on a large scale from wind and solar at a facility located in the port.

The focus of the letter is the construction of a scalable electrolyser which would form the basis for further development, according to alternative and renewable energy news provider Recharge.

For shipping, the facility would allow direct ship calls with the quay and port facilities operating  as an import terminal.  In addition, Warme Hamburg plans to expand a hydrogen network at the port within ten years, the report said.

The site could start operating in 2025.  When built, it would count as one of Europe's largest electrolyser plants.

NIMASA arranged a two-day meeting from Wednesday in Lagos to discuss the issue.

The barge has 30,000 barrels of cargo capacity and can supply more than 20,000 mt/month of VLSFO and low sulfur MGO.