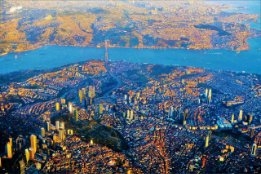 Local bunker suppliers in Istanbul have sounded a positive tone despite a drop in marine fuel sales following measures put in place to address the COVID-19 pandemic.

The drop is in line with an overall decline for global bunker sales, which several analysts estimate have also fallen 8%.

Local players said they were pleased with the performance, particularly as the local market also endured some additional headwinds.

"Most importantly, we managed to provide all volume required despite a dramatic change in the supply chain after the local refinery stopped giving any VLSFO, which has been a key provider for the post 2020 markets," one physical supplier commented to Ship & Bunker.

June sales have slowed even further, another player noted, who said they expect Q2 sales to witness a year over year decline of around 10%.

"I have to say this is still fantastic given the pandemic and general lockdown situation," they added.

Istanbul is a one of the region's major bunker markets; its seven active physical suppliers control around 300,000 mt of storage capacity and 60 bunker barges, and serve some 10,000 ships per year.

A total of 17 witnesses will be questioned in the case.

The port expects to cover 60% of the energy requirements of ships calling at Kiel with renewable power by next year.

Oil Plummets as U.S./China Talks To Curb Inflation Result In No Action