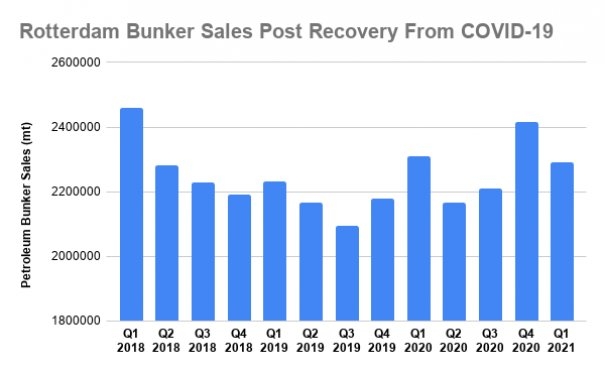 Petroleum bunker sales at Rotterdam, the world's second-largest marine fuels hub, slipped by just 0.9% in the first quarter from the highs of the IMO 2020 transition a year ago.

Total conventional bunker sales excluding LNG, biofuels and lubricants reached 2.3 million mt in the first quarter, according to new Port of Rotterdam data released on Tuesday, down by 0.9% on the year.

Bunker data across leading hubs from the first quarter is shaping up to show a reasonably healthy recovery from the COVID-19 pandemic, with totals at or near the abnormally high levels seen during the shift to VLSFO a year ago as shipping companies were stockpiling the new fuels on concern over availability. Singapore's first-quarter volumes were 8.3% higher than those a year ago, while Panama's were 7.2% lower.

The port has also published biofuel sales for the first time, using data from its TimetoBunker app, posting bio-fuel oil sales of 49,120 mt and bio-distillate sales of 3,305 mt for the first quarter. This is the total volume of biofuel blends containing conventional bunkers as well, with an unknown quantity of biofuel in each blend.

Rotterdam's bunker sales were supported by growth in cargo throughput across all the main freight segments in the first quarter.

Dry bulk throughput jumped by 9.8% on the year to 18.4 million mt, led by strong coal imports because of a colder-than-usual winter and improving coke demand.

Liquid bulk throughput climbed by 3.4% to 52.1 million mt, with the port noting strong inbound and outbound flows of fuel oil and distillates, including two fuel oil VLCC shipments to Singapore.

The port also benefited from the continued strength in the container market, with throughput climbing by 4.5% to 3.7 million TEU.

The firm's net marine profit was up almost tenfold from a year earlier, while volumes jumped by 6.3%.

The company has secured the equivalent volumes of biofuel to cover the emissions from 40,000 TEU of shipments.