IMO2020: New TORM JV "has Potential to Be a Large-scale International Scrubber Manufacturer" 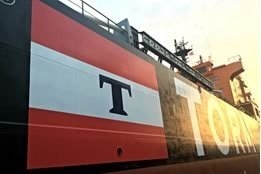 TORM eyes scrubbers for half its fleet. Image Credit: TORM

TORM has decided to bet big on scrubbers for IMO 2020, saying today it not only wants units on up to half its fleet, it has formed a JV to install and manufacture the units.

The tanker owner holds a 27.5% stake in the venture, ME Production China, that has been formed in partnership with Danish scrubber manufacturer ME Production and China's Guangzhou Shipyard International (GSI).

The trio will manufacture and install marine scrubbers in China for both newbuildings and retrofitted vessels.

"This strategic move provides us with a substantial economic interest in a venture that has the potential to be a large-scale international scrubber manufacturer," says Executive Director of TORM Jacob Meldgaard.

Demand for scrubbers is expected to increase significantly

It will also help TORM obtain attractive pricing for the technology, Meldgaard added.

Having said in August it would install scrubbers on 14 vessels as part of its plans for IMO 2020 compliance plans, the tanker owner says it has now ordered a total of 16 scrubbers from the new JV and signed a letter of intent for an additional 18 scrubbers. The net result: a commitment to install scrubbers on at least 21 vessels and potentially up to 39 vessels - roughly half of its fleet.

Interest in scrubbers has boomed this summer, with DNV GL numbers indicating in October there are 1,850 vessels with installed or confirmed orders for scrubbers, up from 817 in May.

But if TORM's comments are any guidance, that is only the tip of the iceberg: "Demand for scrubbers is expected to increase significantly," says Meldgaard.

TORM is not the only shipowner to get into the scrubber manufacturing game; John Fredriksen's Frontline in June took a 20% stake in exhaust gas cleaning system firm Feen Marine Scrubbers Inc. (FMSI).