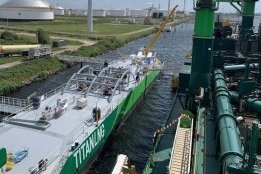 Titan LNG has been supplying LNG as a bunker fuel in Northwest Europe for several years. Image Credit: Titan LNG

Ruling out LNG as a bunker fuel while seeking to promote the decarbonisation of shipping is 'incredibly short-sighted', according to gas bunker supplier Titan LNG.

The firm was responding to the announcement of the Cargo Owners for Zero Emission Vessels organisation this week, in which nine users of shipping including Amazon, IKEA and Unilever pledged to use only freight services powered by zero-carbon fuels by 2040 and said LNG would not be included.

"Explicitly ruling out ships that run on LNG is incredibly short-sighted," Michael Schaap, commercial director at Titan LNG, said in a LinkedIn post on Thursday.

"The blindness surrounding shipping's pathway to decarbonisation via LNG, bioLNG and in the longer-term hydrogen-derived (synthetic) LNG is alarming.

"We know that LNG is not the end game, but it is the best starting point available today, which enables us to start reducing GHG as well as local emissions now."

Schaap went on to argue that container lines CMA CGM -- which has been an early adopter of LNG bunkering -- and AP Moller-Maersk -- which has ordered ships this year planned to run on green methanol -- are making similar progress in decarbonisation.

"Let's set the record straight; CMA CGM and AP Moller-Maersk are at the same stage," he said.

"Both rely on sufficient renewable energy sources to come online and enable the production of their hydrogen-derived, green cousins.

"However, companies such as CMA CGM recognise that LNG reduces GHG and local emissions today and that the second stage in LNG's pathway to a carbon-neutral future is bio-LNG, a liquid biogas made by processing organic waste flows that are available in abundance and fit into the circular economy.

"The result is a fuel that is not just net zero in GHG emissions, it also has the potential to be net negative.

"And can be dropped in a blended with conventional LNG – right now – to further reduce emissions."

Titan has previously suggested synthetic LNG could be available in Northwest Europe as soon as 2024.

The company has won a tender to supply Corsica Linea's new ro-pax ferry the A Galeotta.

TFG backer Trafigura gave an update on the firm's prospects in its annual report on Wednesday.