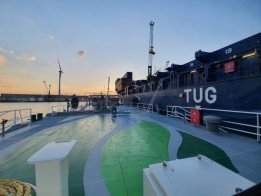 Synthetic LNG may be available as a bunker fuel as soon as 2024, according to gas supplier Titan LNG.

"The next step of using green hydrogen to convert into E-Fuels (synthetic LG) is under development by Titan for implementation in 2024," the company said in a LinkedIn post on Wednesday.

Conventional fossil LNG is unlikely to be compatible with the shipping industry's longer-term plans to eliminate carbon emissions, but the use of synthetic and bio-LNG may allow current engines designed to run on gas to continue being used in the coming decades.

In the same post Titan announced it had completed its first bunkering of conventional LNG to a container ship at Antwerp, supplying gas to the Wes Amelie at the Belgian port on Tuesday.

The event was scheduled for 10-13 January.

MOL and Vopak are set to jointly own and operate the FSRU Bauhinia Spirit in Hong Kong.