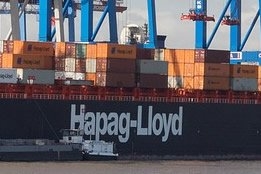 Hapag-Lloyd today announced that it has finalised its merger with UASC. File Image / Pixabay

Hapag-Lloyd AG (Hapag-Lloyd) today announced that it has finalised its merger with the United Arab Shipping Company (UASC).

"This is a major milestone in the history of both companies as we continue to evolve to meet customer needs and adapt to market conditions," said Hapag-Lloyd in a statement to its customers.

"In the 'new' Hapag-Lloyd, one of the top 5 global carriers, we will be ready to deliver a number of important added benefits to you, including an extensive global network – now with added focus in the Middle East – making us capable of serving you even better, globally and locally."

The newly combined company is also noted to offer a larger, more efficient, and "environmentally friendly" fleet of vessels, said to enable Hapag-Lloyd to deploy the most effective vessel class for each trade lane.

This is a major milestone in the history of both companies

The two companies will continue to operate independently until mid-July when the first UASC services will be transferred to Hapag-Lloyd, followed by the remaining services gradually over several weeks.

"With two large, successful mergers in recent years, we have an industry-leading track record for conducting integrations rapidly and efficiently – and are confident of achieving this goal again," said Hapag-Lloyd.

Earlier this month, Ship & Bunker reported that Hapag-Lloyd, in its 1Q 2017 financials, logged a positive operating result despite being hit by what is said was a sharp increase in bunker prices.

Meanwhile, Asian countries are driving a boom in recovery.