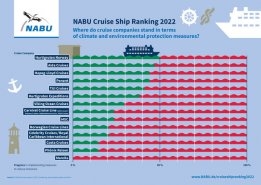 German environmental group NABU have delivered another scathing assessment of the Cruise industry as part of its latest annual environmental review of the sector.

The NABU Cruise Ranking 2022 report released today reiterates regular criticism it has made over several previous years for the sector's reliance on fossil bunker fuel to run its ships and a lack of environmental planning.

For 2022 NABU's assessment uses a 17 point system to assess 19 cruise companies, with first-placed firm Hurtigruten Norway receiving just half of the achievable points.

In comparison the previous assessment, made in 2020 using an eight-point scoring system, saw the top ranked firm receive 80% of the available points.

Still, NABU this year did see some positives.

"The majority of cruise companies at least have a climate strategy by now and are committed to the Paris climate goals. The front runners start using modern technologies such as batteries and fuel cells. But for the time being only to complement the combustion engine. TUI Cruises ordered a ship that is planned to use methanol," NABU said.

If nothing else, NABU's assessments highlight how quickly opinion can change when it comes to what it means to be 'green', and what it takes to achieve a top ranking.

In 2019, for example, when NABU used a ranking system that awarded companies up to four 'green propellors' to denote environmental performance, Aida Cruises topped the air pollution rankings with maximum points for its liquified natural gas-powered ship, Aidanova, while Costa with the LNG/HFO dual-fuelled Costa Smeralda also received a maximum possible score of four green propellors.

Environmental advocates will no doubt argue that such a rapid shift in opinion is well in keeping with how quickly action needs to be taken to address ship pollution.

But with ships typically taking years to plan and build, and then seeing a service lifetime measured in decades, it nevertheless underlines the difficultly all vessel owners face - cruise sector or not - in deciding what technologies to use to improve their environmental credentials.

In term's of what action NABU would like to see the sector take, the group's cruise export, Sönke Diesener, said: "By phasing out heavy fuel oil today and making zero emissions the standard for all newbuild ships cruise lines can credibly demonstrate that the announcements for a climate-neutral future for cruise shipping are actually serious."

Demand for biodiesel in the US bunker market has been 'minimal' so far this year, according to Bunker One USA and Hartree Partners.

The company is looking for candidates with a strong commercial focus and the ability to build relationships with key stakeholders.