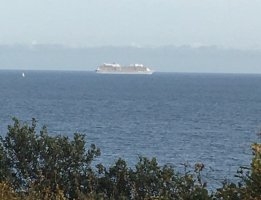 An NGO which keeps tabs on cruise company plans to limit emissions has said that concrete programmes to effect zero emissions by 2050 are largely absent.

Hamburg-based NABU wants to see the industry use its current downtime to get to grips with coming environmental challenge.

"The majority of the cruise industry is far from meeting the requirements of the Paris climate goals," the non-governmental organisation said.

"A survey of the 18 largest providers on the European market showed that hardly any shipping company currently has a specific strategy to transform the fleet towards emission-free operation," it added.

According to Nabu's cruise expert, Daniel Rieger, the pressure on the cruise industry is only going to increase.

The environmentalist believes the industry's current downtime should be used "to seriously deal with the question of the signs under which cruises can have a future".

According to Rieger, the direction of travel towards being emissions-free by 2050 is clear.

"Regulations are taking shape at European level that will include shipping in emissions trading and will abolish the tax exemption for marine fuels. The pressure on providers will increase."

The collapse of demand for cruise trips from the pandemic has seen the world's cruise ship fleet laid up. However, the stationary ships are proving to be an attraction in themselves.

A local ferry company in Mudeford at Bournemouth on the UK's southern coast runs local cruise trips to 'cruise' around the cruise ships moored off the coast. The move has prompted great interest from cruise ship watchers as well as the world's media.

Captain Paul Derham, of the Mudeford Ferry Compay, was quoted by the Bournemouth Echo saying: "I am not used to this amount of attention; the phone hasn't stopped."