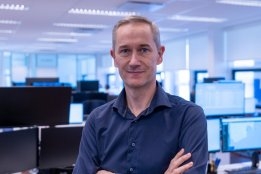 Viscosity is defined as the resistance of a fuel to flow and is a measure of the fluidity of the product at a certain temperature. The viscosity of a fuel decreases when the fuel temperature increases i.e. it becomes more fluid. The significance of viscosity for marine fuels is such that:

Viscosity is not an indication of fuel quality, and it is a misunderstanding that residual fuels with a lower viscosity automatically means that the product is lower in quality. In reality, viscosity only becomes a serious quality concern when the viscosity is below 2 cSt. Historically, viscosity was used to order a fuel by indicating the grade based on the viscosity of the product. Viscosity was also a key blending target for refineries and fuel suppliers where blending was usually done using a low-quality, heavy residual stream (e.g cycling oils containing considerable amounts of highly abrasive cat fines).

With the introduction of the global sulfur cap of 0.50%, density and viscosity were no longer the main blending targets, but instead it was replaced by sulphur as the main blending target. To produce 0.50% fuels, it is no longer possible to use large quantities of low quality and heavy residual streams in the blend. Instead, lighter blending components are being used such as higher quality refinery streams and even distillate fuels. These different blending components have inherently lower viscosity and density properties resulting in a lower density and viscosity product but with a higher overall quality. Therefore, low viscosity and low density fuel products are generally an indication of a better quality product.

Lower viscosity fuels are in general: 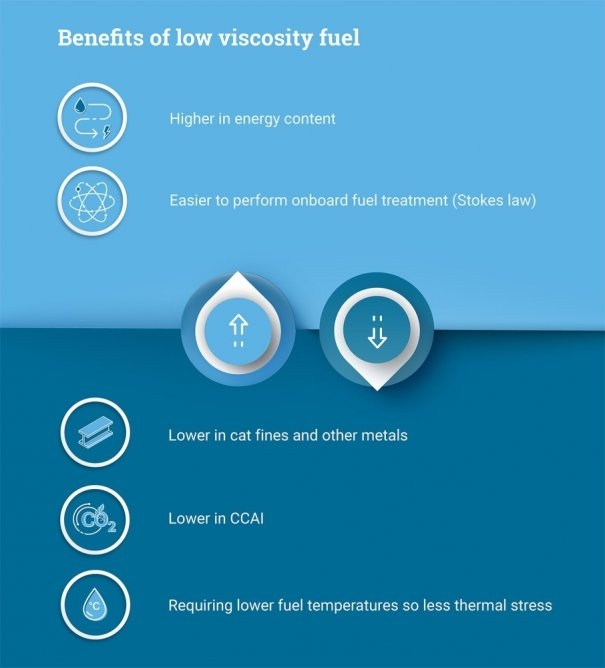 Lubricity is the measure of the reduction of friction of a product. The misconception is that lower viscosity fuels might be more susceptible to lubricity issues. It is known that lubricity is not a critical parameter and only applicable to ultra-low sulphur distillate fuels e.g. ISO 8217 includes lubricity for clear and bright distillate fuels only when sulphur is below 0.05 % m/m.

Lubricity was introduced as an ISO 8217 specification parameter with the release of the 2010 edition. The lubricity criterion was adopted from the automotive industry, where a variety of fuel pumps and fuel injection systems were damaged by low sulphur fuels with poor lubricity. The main reason behind poor lubricity is that the removal of sulphur during the refinery process also impacts (reduce) the lubricity capacity of a fuel.

For marine, the impact is significantly less as marine fuels still contain sulphur and thereby normally maintains its lubricity capacity. For the marine industry, some engine manufacturers recommend testing for lubricity to be carried out only if sulphur is below 0.01% m/m.

What is often overlooked but what is recognized to be more critical for marine fuel system and diesel engine fuel pumps is when the viscosity will be less than 2 cSt. Reason is that with a too low viscosity a satisfactory hydrodynamic oil film between fuel pump plunger and barrel cannot be maintained, thereby causing the risk of fuel pump seizures and/or sticking. So a very low-viscosity fuel oil challenges the function of the pump in three ways: 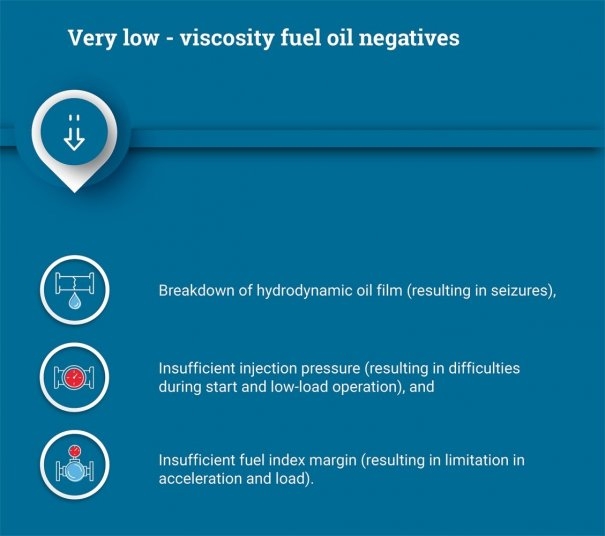 To mitigate the risk of low viscosity a cooler or chiller might be needed to maintain the viscosity at the fuel pumps above the minimum of 2 cSt. This is due to increase in fuel temperatures during operation onboard a vessel a hot fuel system. What also should be noted is that fuel pumps with high running hours are more sensitive to the potential risks of using low viscosity fuels.

So in summary of the above we can conclude that: