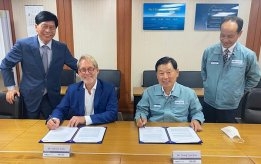 "With new fuels, new materials are needed and manufacturers' involvement in design is critical to ensure that engines can be produced at reasonable costs and in a reasonable timeframe," said Dominik Schneiter, VP R&D, WinGD.

"HSD is well-known as a high-class engine builder that will be able to support WinGD in delivering the methanol-fueled two-stroke engines that our customers will be seeking for their vessels in the near future."

As the industry looks to decarbonize its operations, methanol is one of the leading candidates to become a key part of the future marine fuel mix.

USTC's Global Risk Arm to Have Bigger Role Within Group

GRM to move out of Bunker Holding's orbit to become an independent entity within the group.

Company will "continue to scale up" its biofuel offer to shipping.

The company is looking for candidates with at least three years of experience in marine or lubricant sales.