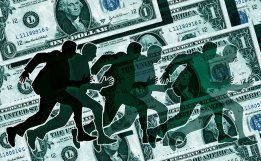 The bunker industry may struggle more with its access to lending in the coming years. File Image / Pixabay

A selection of bunker veterans addressed the credit problems facing the industry at IBIA's Shipping & Bunkering in Transition conference this week, with one suggesting as much as 10% of the traditional financing has been withdrawn.

A credit crisis for the bunker industry had been widely anticipated in the run-up to the IMO 2020 transition, with the much higher cost of dealing in VLSFO expected to stretch financing limits for some smaller players.

The collapse in crude prices a year ago, delivering VLSFO prices much lower than HSFO had cost in 2019, put paid to that theory for a while. But with crude prices now hovering in the $60-65/bl range and VLSFO in Singapore about 13% higher than HSFO cost at this time in 2019, concerns are being raised again about how long the benevolence of the industry's lenders will last.

Adding to this unease is the withdrawal of some banks from commodity trade finance over the past two years. Fraud allegations hitting both Hin Leong Trading and GP Global last year will have helped cement the banks' impression of the commodity trading industry as a risky investment.

If the competitors go belly-up ... it always sheds a bad light on all of us.

"It's nothing you can say we are really ever happy about in our business, if the competitors go belly-up, because it always sheds a bad light on all of us," Lars Nielsen, executive group director of BMS United Bunkers, said at the IBIA conference on Tuesday.

"We've been told that we are not serious companies, every time something like that happens.

"We believe at this point in time, probably approximately 10% of the financing in the market has been withdrawn, primarily from French and Dutch banks.

"There are some German banks showing interest in maybe entering the game, but I think new players will definitely be significantly more expensive than we've been used to."

Jonathan McIlroy, head of bunker trading at Al Ghurair Energy, confirmed that new entrants to the bunker lending market were emerging, but seeking much higher yields.

These other solutions are not cheap money.

"These other solutions are not cheap money," McIlroy said.

"They're coming with price tags of 7-8% or more, and that is a significant competitive disadvantage for any company that has to access finance at that cost."

Lending would traditionally cost in the low single digits of percentage points, depending on collateral, according to credit industry sources, but some new forms of lending have emerged with costs as high as 12%.

McIlroy went on to say it has typically been medium-sized bunker companies that have been hit hardest by the credit problems facing the industry.

"The small players generally are some of the companies which are least reliant on traditional bank finance; many of them basically trade with their own resources," he said.

"The companies at the top of the market up until now have at least publicly been relatively unaffected by these changes.

"By and large, those companies are so well-structured and so engaged already with their banks that they've been able to deal with it.

"Where I've noticed more pressure is in what I would call the middle-size players; I think they are feeling the pinch at the moment, and may continue to find that the market is difficult for them."

Sinan Utlu, senior credit manager at Monjasa, suggested increased transparency from the industry could improve its access to lending.

When the uncertainty increases, the price of money and tightening or revisiting existing lending policies will be a hot topic.

"First of all, this should not come as a shock; it's completely normal, due to the recent incidents, when the uncertainty increases, the price of money and tightening or revisiting existing lending policies will be a hot topic," he said.

"As a sector, we need to take this very seriously, especially when considering the record-low interest rates, that the sector as a whole has some challenges in getting the necessary credit facilities in place.

"We need to ask ourselves, what can we do to step out of the shadow? It's obvious that today we get more questions from the lenders about our compliance policies, credit policies, how we manage the treasury of the company."

I'm sort of optimistic about the market in the coming years.

"I'm sort of optimistic about the market in the coming years, because of the recovery in the economy, and also probably the infrastructure investments in the US and other countries," he said.

But Fratelli Cosulich is still keeping a close eye on the financial health of the companies with which it does business, Zhou added.

"I think the main priority that we have placed in the last one to two years, is to shorten our review period to carry out finance reviews amid significant market fluctuation," he said.

"We would now probably be more insistent in our counterparties giving us the requested information, especially financials."

The company's LNG bunker barge, the Dmitry Mendeleev, is due to undergo sea trials in the spring of 2021 before joining the company's fleet in the second half of this year.